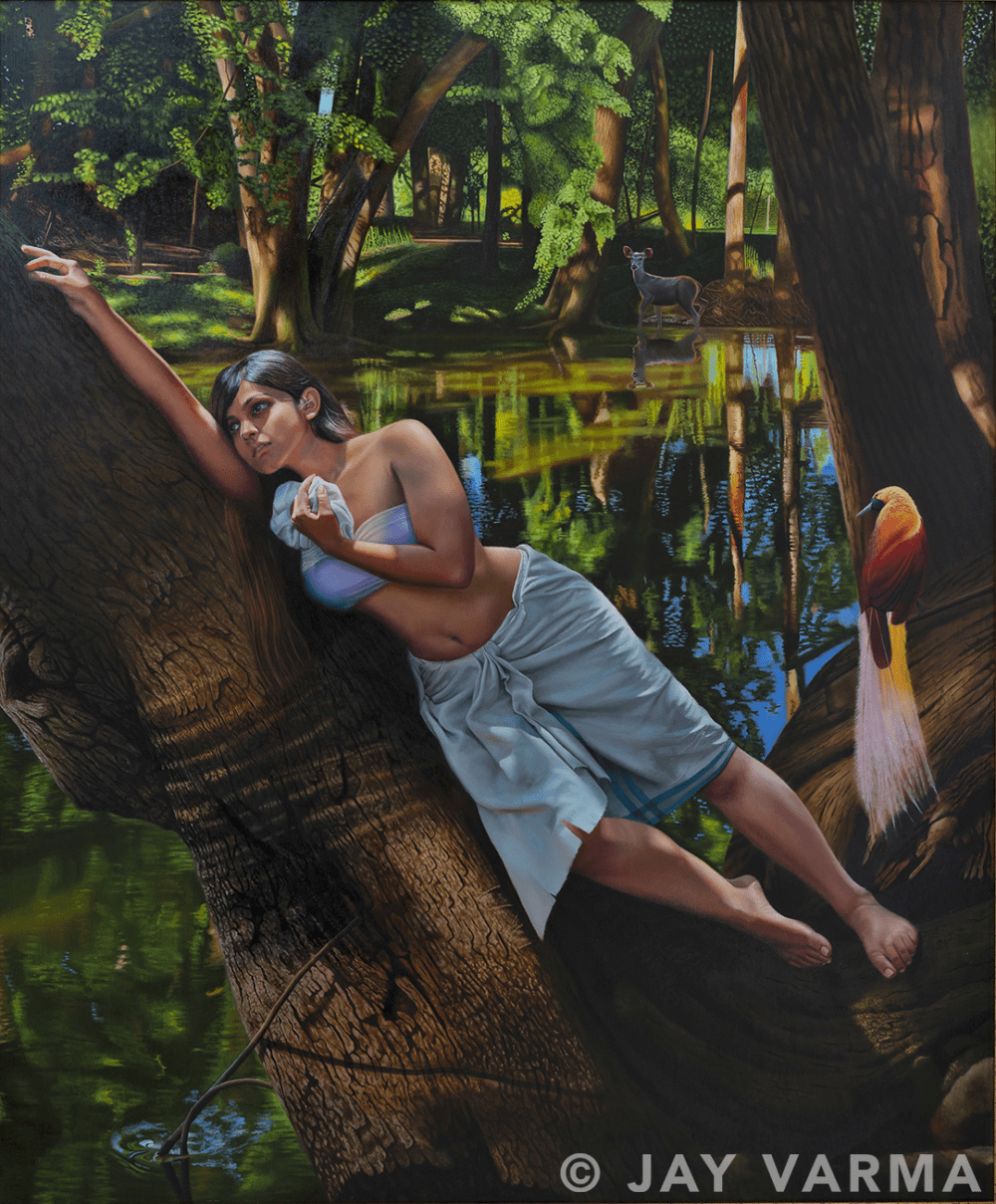 Damayanthi, princess of Vidarbha wakes up in the morning in the wilderness and finds her husband, King Nala of Nishadha, gone. She cannot understand why he would desert her without so much as a word of farewell. She is unaware that a vengeful demigod is out to destroy him. She is also unaware of the danger she is in, all alone in the forest and the many twists and turns her story would take before she can finally reunite with him. But even had she known all of this, it wouldn’t change her determination to be with him. This moment captures her uncertainty, her mind clouded with dark thoughts. Doesn’t her husband love her anymore? Did some wild creature or demon capture him in the night? Should she wait for him, in case he returns? Soon she has to make a decision: cross over the river to the other side where her father’s palace lies, or follow her husband into the forbidding forest. Soft rays of slanting sunlight bounce off her skin and the curious denizens of the jungle peer at her, wondering what’s wrong. Nala and Damayanthi’s story is an epic adventure, filled with demons and demigods, a serpent king and a swan king, magical cloaks, betrayal and treachery, far-away kingdoms, horses as fast as the wind and much more. But above it all, it is a story about steadfast love and the vicissitudes of fortune Nala and Damayanti endure before they can finally be together. 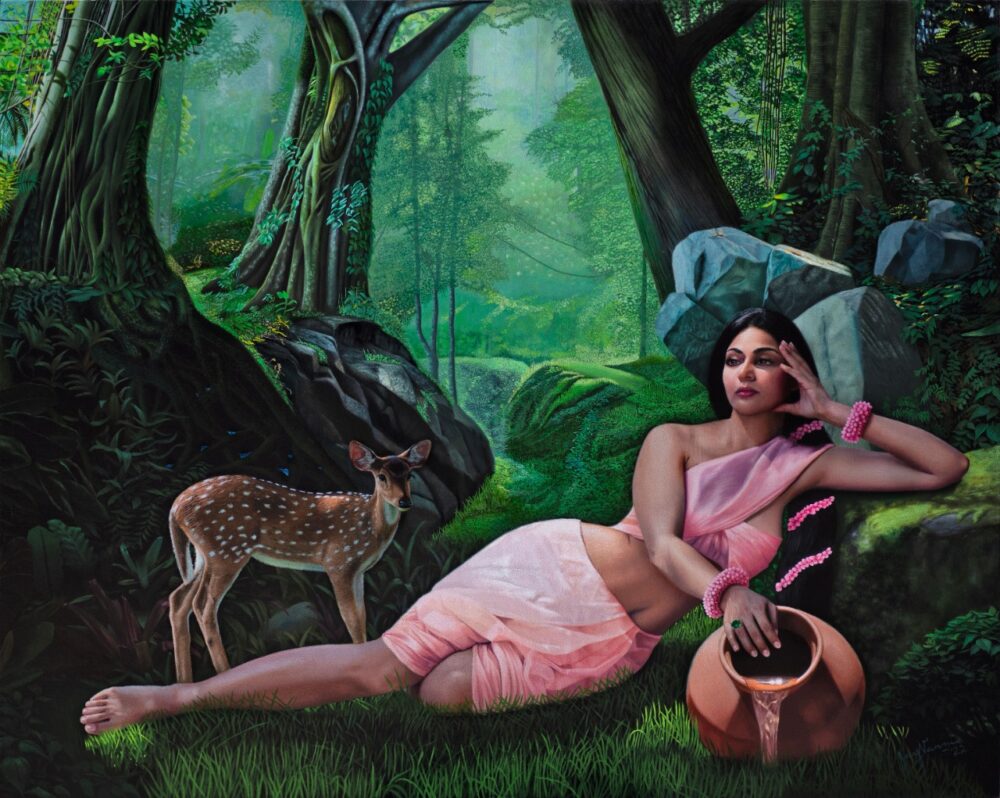 Shakuntala is the daughter of Menaka, a divine apsara and the powerful sage Vishvamitra. Her name derives from the word “Sakuntam,” (birds) as they were protecting her as a baby when she was found in the forest. There are two versions of her story: In the latter day play by Kalidasa, she is a stereotypical heroine, pining for her love but in the original Mahabaratha, she is aware of her status and capabilities and stands up to the king when he refuses to acknowledge her. Here, although Dushyanth’s ring can be seen, it is the older version that is being invoked. For Shakuntala is a woman of significance and substance and mother of Emperor Bharatha, the ancestor of all the powerful kings in the Mahabaratha and after whom India was named. Deep in an enchanted part of the forest, on a grassy mound lit by the dappled light of the morning sun, Shakuntala is lost in reverie. Water from the earthen pot flows freely like her thoughts and the deer seems to almost sense them as well, ready to spring away at the slightest disturbance. Time stands still. 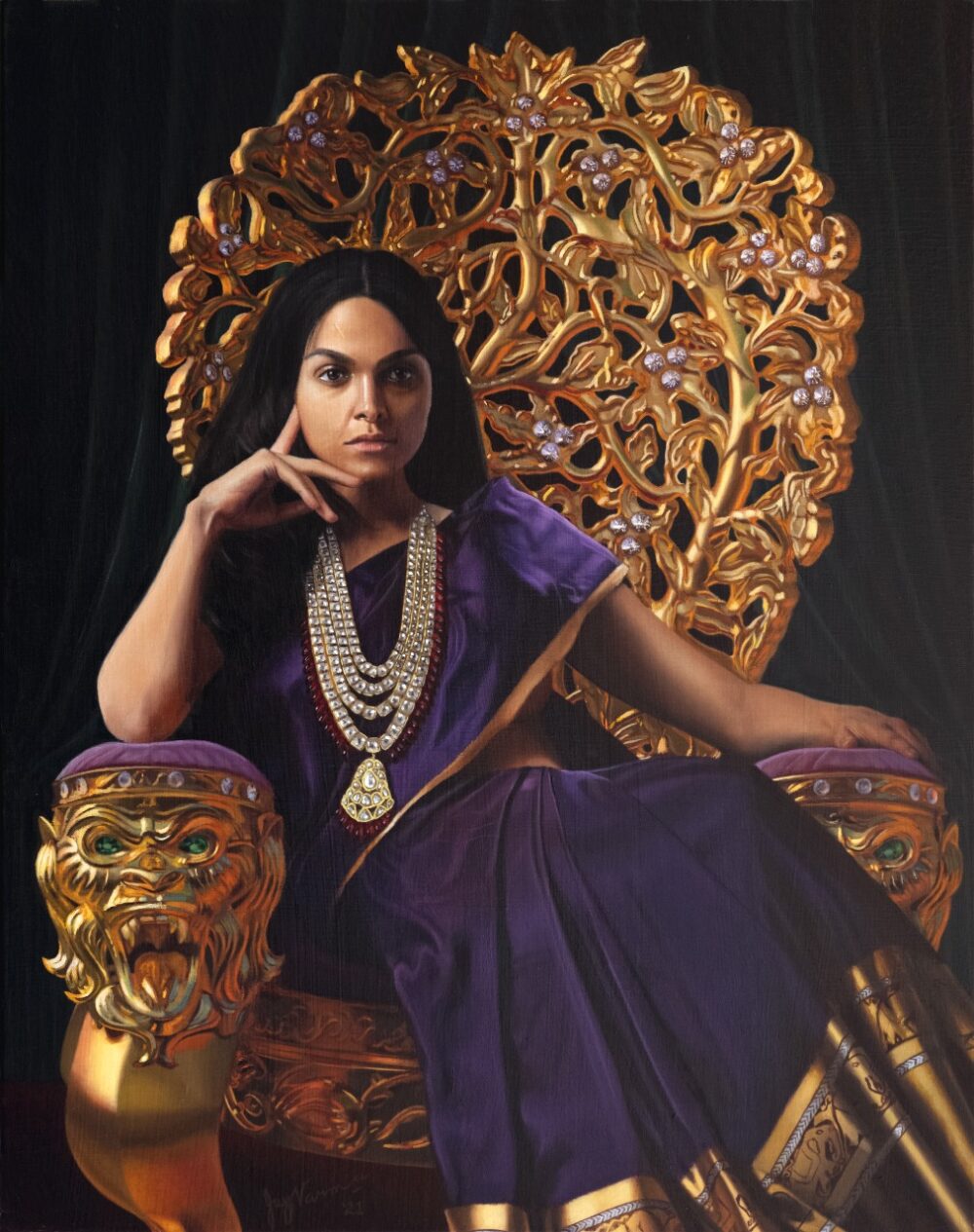 On the face of it, Tara makes only a few appearances in the Ramayana. But these are moments of importance, and she is, like the other kanyas, a fount of wisdom and discernment. Described originally as the daughter of Sushena, the physician at the monkey court of Kishkinda, she is given more romantic origins in later sources. Sometimes she is described as one of two beauties who emerged at the churning of the oceans by the devas and asuras; Even her marriage to the Kishkinda king, Vali, is not typical. In certain accounts, she was his brother Sugriva’s consort first, only to be snatched by Vali; in others, she is in a polyandrous relationship with both men. What is known for sure, however, is that at different times, Tara was associated with each brother and remained queen. Vali also gave her a son by the name of Angada, who would later serve as Rama’s envoy to Ravana, and fight gloriously in the battle to rescue Sita. Interestingly, Tara is linked not just to Sita but also Ahalya—some accounts have it that her husbands were Ahalya’s sons, which would make Tara the daughter-in-law of another Panchakanya. She may lose, and she may win at times, but Tara always ensures that she will stay relevant, preserving what is hers. That is why this lady in purple too sits with the kanyas—she may wear the colour of wisdom, but she does so enthroned in a chair of power. For both sides matter equally to Tara, queen of Kishkinda. 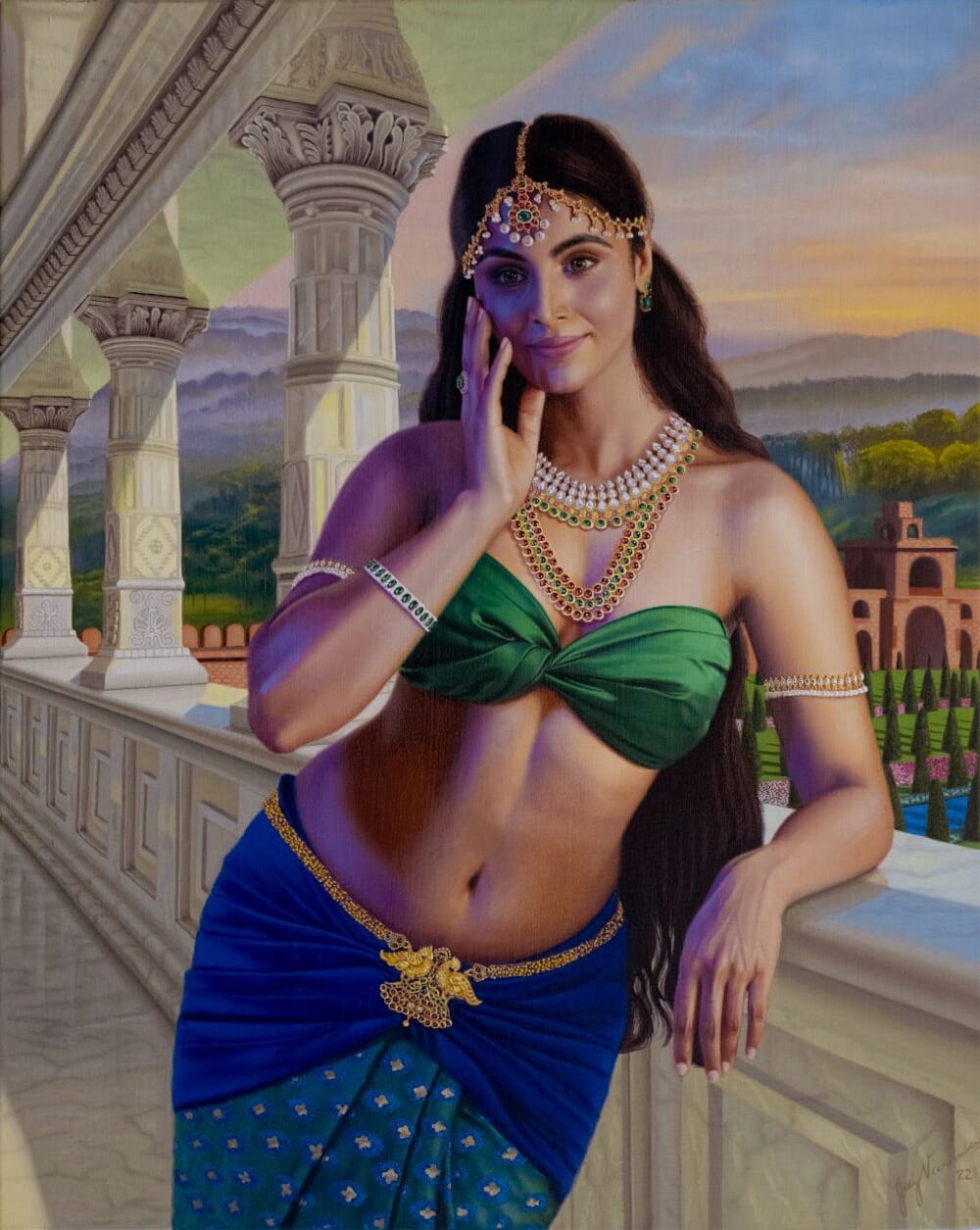 Draupadi’s life in the Mahabharata was not an easy one. Born—like the other kanyas—not of a mortal mother but of supernatural forces, she was raised in a palace by a king. There was joy and comfort, and at first she appears as the model of ‘good’ womanly conduct. But then reality strikes and the fairy-tale breaks. As a girl, she becomes Arjuna’s wife through a Swayamvara, but finds that she must distribute her affections among the other four Pandavas also—it is said that after a year with each husband, Draupadi went to the next as a virgin, or kanya. But this hardly communicates the turmoil of having to live with a group of men, who at some times were her spouses, while at other times became brothers in law, treating her with sisterly reverence. In addition, external circumstances also affected Draupadi’s fate through the actions and inactions of her men: she was gambled away, humiliated in court, faced exile and abduction, and even had to serve as a maid. Draupadi, however, never let go of her own wit and intelligence, even if larger forces pushed the Pandavas into uncertain situations, Draupadi never ceased to try and shape it to her advantage. Her fury is proverbial: more than once she had enemies liquidated, and famously vowed to wash her hair in the blood of a particularly vicious adversary. Draupadi is shown here on the day of her Swayamvara at her father’s palace. She has just seen Arjuna and is smitten by his noble bearing and charisma, blissfully unaware of what lies ahead of her. 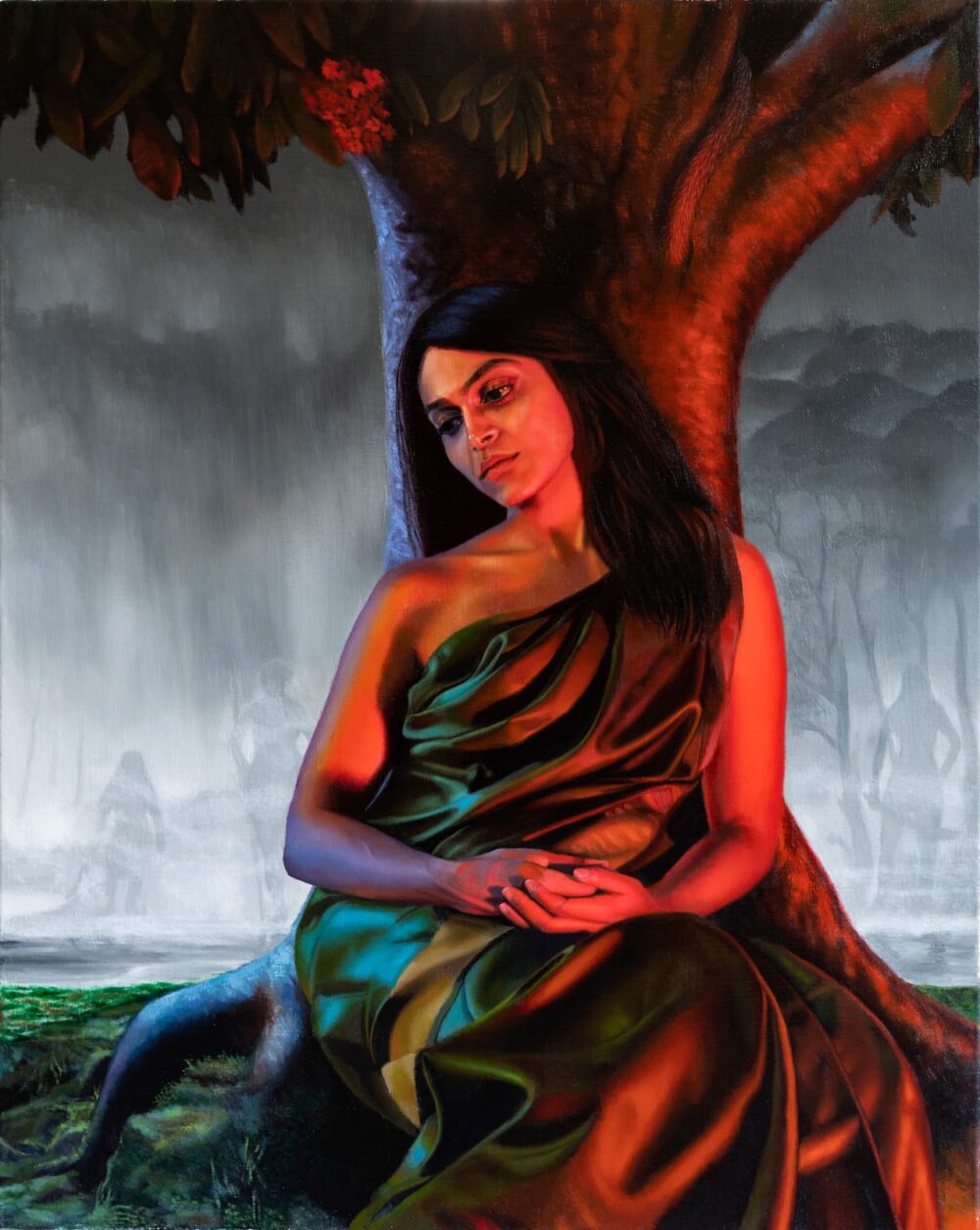 The story of Sita begins and ends with the earth. Discovered by King Janaka as he ploughed a field during a royal ritual, her origins are mired in mystery. In some versions of the epic, she is the ruler’s natural daughter; in others, her father is actually Ravana, the very man who would later abduct her, and who serves as the anti-hero of the Ramayana. But she is, either way, the earth personified—hence her other name, Bhumija. And like the earth, she must bear a heavy weight and endure a great deal in patience. Unlike Draupadi, who did not hesitate to speak her mind with the sharpest words, and unlike Ahalya, who broke rules and paid for it, Sita is more stoic. She suffers, but not because she has transgressed; her suffering is due to the fact that the rules are themselves not just to her. Unlike her sister kanyas, Sita is also not involved with any man but Rama, her husband—yes, Ravana seizes her, and Rama likens her to a defiled ritual offering, but her fidelity is proven. And yet, despite the fact that she did her duty as best as she could, she too found the odds stacked against her—so in the end, she returns to the earth’s embrace, abandoning a life of forbearance for eternal peace. In this painting we see Sita in the Asoka Grove, after her abduction by Ravana. The haze in the background represents her heavy mind and heart—the inner world of a Sita at the very edge of her fortitude. 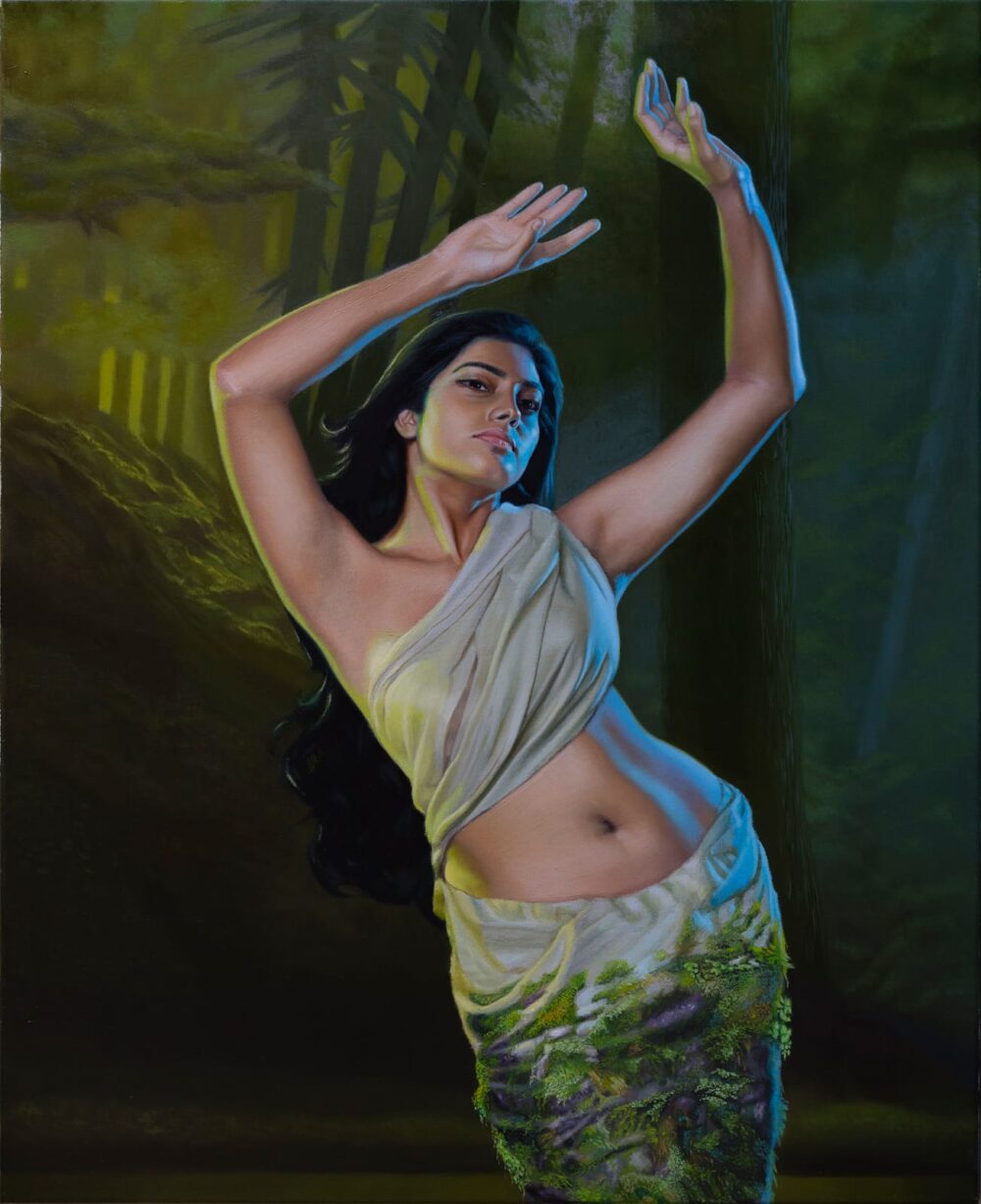 The general outline of the story as popularly known is as follows: Ahalya, a great beauty, is the wife of the sage Gautama, living with him in their ashram in the forest. Indra, lord of the heavens, however, is determined to have her. One day, when Gautama is away, the god takes his form, misleading Ahalya who welcomes his embraces. But the trick is caught—Gautama curses both Indra and his wife. The latter turns into stone, waiting for the day Rama, hero of the Ramayana, to lift the curse. In this painting, he has accidentally brushed the stone, thereby purifying her and restoring her to human form. Rama is not visible in the painting, but the blueish light that falls upon Ahalya symbolises his presence. Ahalya in this account is a pious, devout wife, who has been tricked by Indra, and cursed by her husband for no fault of her own. She is a forthright, confident, strong woman, who has a past but who does not carry it with shame or as a burden. She was brought into existence by Brahma, the creator, himself, and was not born of mortal parents: that incandescence and personality come across in her gaze and posture. To some she is tarnished, to others a layered complicated being but of one thing we can be sure: when Ahalya, branded a rule-breaker, returned, she was as beautiful, splendid, and as full of force as before. Her inner worth was unaffected, and as the story goes, even the gods showered flowers upon her from the heavens. 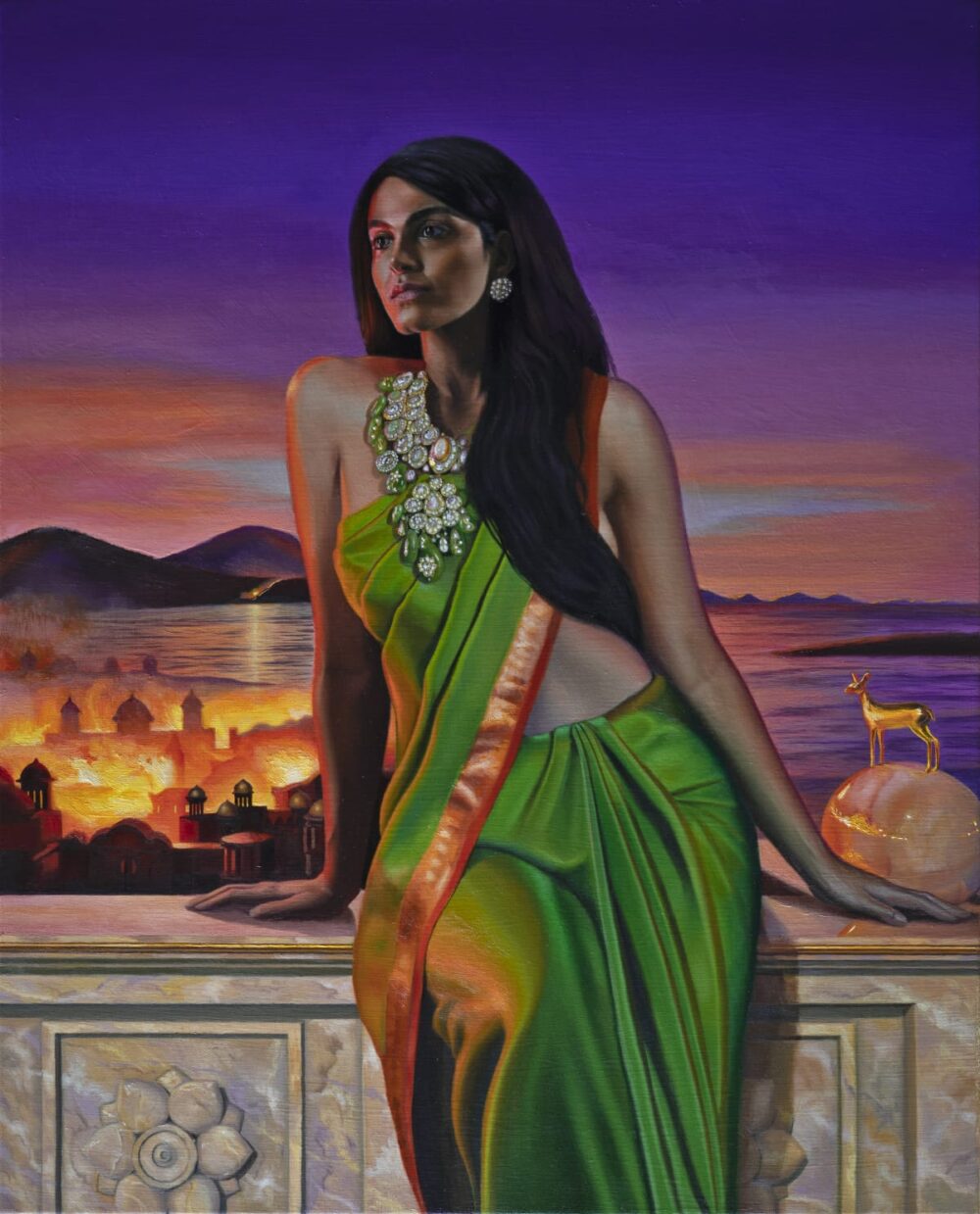 Among the panchakanyas, Mandodari is probably the most inscrutable. Mandodari was a person of divine blood—her father was the asura king Maya, but her mother was Hema, an apsara. In some stories, she is herself an apsara. In the Ramayana, Mandodari plays a most important role. When Ravana abducts Sita and at first attempts to bring her into the palace, it is Mandodari who stops him. Despite Ravana being the most powerful being in the world, Mandodari didn’t bow down to him. She advised him on what was right, even if it meant it would attract his anger. Shrewdly, perhaps to preserve her position as queen, or to preserve Sita’s dignity, she plays on Ravana’s masculine ego. A man like him, she declares, surely can do better than coerce a woman against her will; Ravana must make Sita come to him of her own volition, not take her by force. And so it is that Sita is placed in the Asoka Grove. After her husband’s death at the hands of Rama, Mandodari mourns. Her love for Ravana was real. In this painting, we see the splendid golden city of Lanka burning soon after Hanuman has set the city aflame. Alternately, this could represent the fall of Lanka in the final battle with Rama. Mandodari will lose not only her husband but also her son, Indrajit, in this war, and her darkening face augurs a terrible eventuality. While the men around her fell victims to a tragic—and unnecessary—game of power, war, and honour, she remained unsupplanted. And in that perhaps lies her victory. 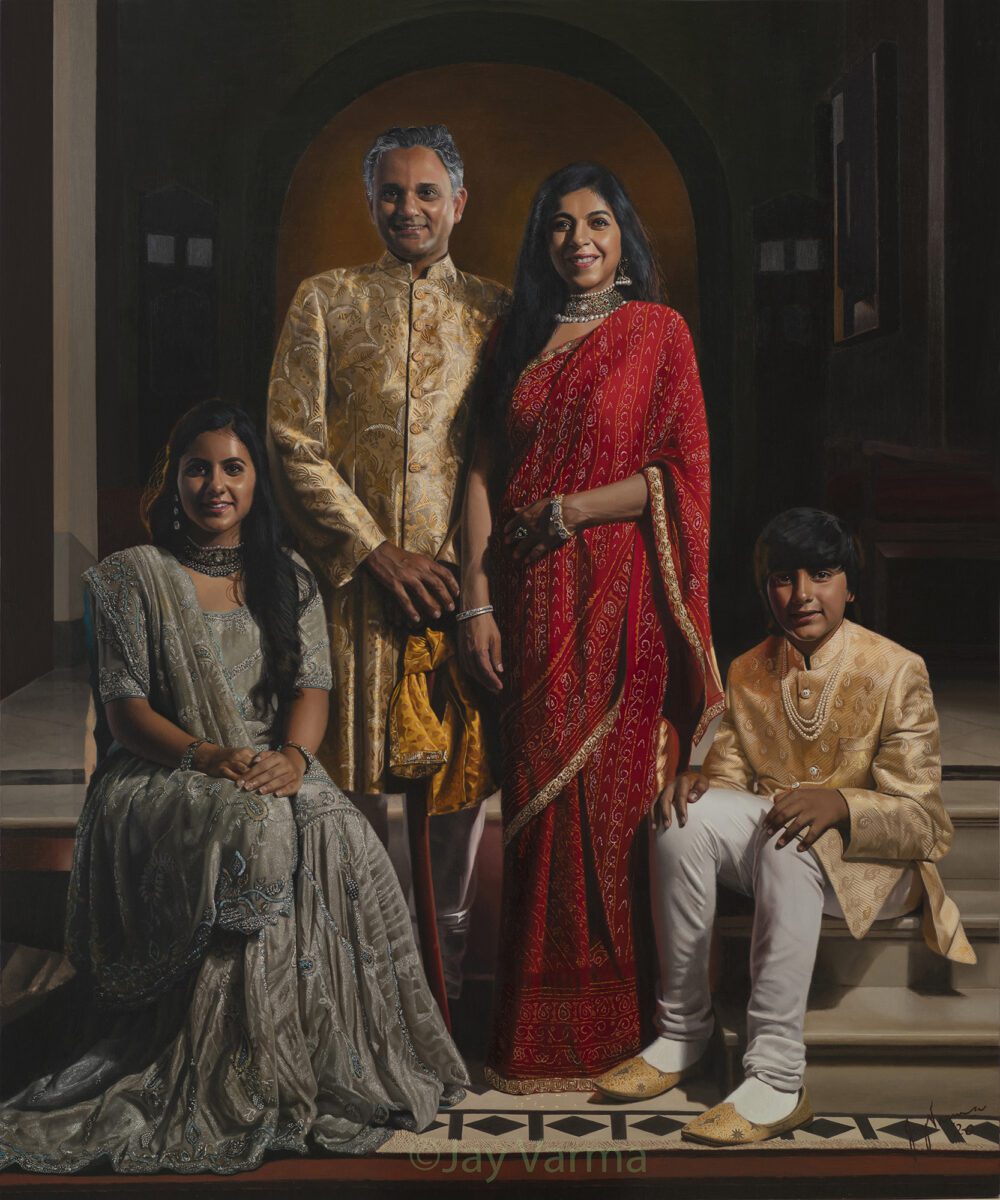